* In the first quarter of 2018, the Company adopted Accounting Standards Update No. 2014-09 (“ASU 2014-09”), Revenue from Contracts with Customers (Topic 606), which changed the timing of recognition of initial franchise fees, development fees, territory fees for our international business, and renewal and transfer fees, as well as the reporting of advertising fund contributions and related expenditures. See the “Adoption of New Accounting Guidance” section below for additional information. Amounts presented for the thirteen weeks ended September 30, 2017 have been adjusted to reflect the adoption of ASU 2014-09.

** Adjusted EBITDA is a non-GAAP measure. A reconciliation of adjusted EBITDA to the most directly comparable financial measure presented in accordance with GAAP is set forth in a schedule accompanying this release. See “Non-GAAP Financial Measures.”

Chairman and Chief Executive Officer Charlie Morrison stated, “We drove exceptional results during the third quarter through top line momentum and strong operating leverage, which led to adjusted EBITDA and EPS growth of 23% and 31%, respectively. Our performance is a testament to the continued focus and execution on our four key, long-term growth strategies: national advertising, digital expansion, national delivery roll out, and continued global unit expansion. These four growth strategies sustain and reinforce our ‘category of one’ positioning, and we believe will ultimately enable us to become a top 10 global restaurant brand.” 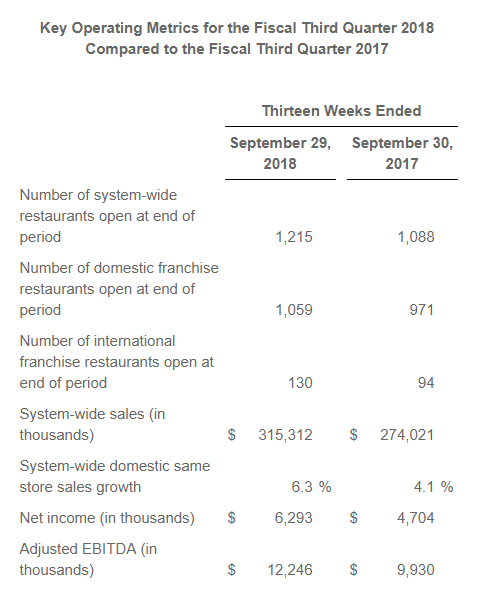 Cost of sales increased to $8.0 million from $7.8 million in the fiscal third quarter last year. As a percentage of company-owned restaurant sales, cost of sales decreased to 67.9% from 80.9%. The decrease was driven primarily by a 29.8% decrease in the cost of bone-in chicken wings as compared to the prior year period, as well as our ability to leverage costs due to the 5.0% increase in company-owned restaurant same store sales.

Selling, general & administrative expenses (“SG&A”) increased 27.6% to $10.3 million compared to $8.1 million in the fiscal third quarter last year. The increase in SG&A expense was primarily due to an increase in payroll and benefit expenses related to planned headcount additions.

The Company adopted ASU 2014-09 in the first quarter of 2018, using the full retrospective transition method, which resulted in adjusting each prior reporting period presented and recording a cumulative effect adjustment as of the first day of 2016. The adoption changed the timing of recognition of initial franchise fees, development fees, territory fees for our international business, and renewal and transfer fees, as well as the reporting of advertising fund contributions and related expenditures. Additional information regarding the Company’s adoption of the new revenue recognition guidance and the impact to historical financial results is contained in Exhibit 99.2 to the Company’s Current Report on Form 8-K, filed with the Securities and Exchange Commission on February 22, 2018.

In recognition of the Company’s strong cash flow generation, confidence in the business, and commitment to returning value to stockholders, our Board of Directors has authorized and declared a quarterly dividend of $0.09 per share of common stock, totaling approximately $2.6 million. This dividend will be paid on December 18, 2018 to stockholders of record as of December 4, 2018.

Subsequent to the fiscal third quarter of 2018, the Company announced its intention to complete a refinancing transaction. The Company intends to issue approximately $300 million of new, fixed rate notes and use the proceeds to retire all of the Company’s existing debt, to pay transaction costs associated with the refinancing, and for general corporate purposes. The Company also expects to enter into a new $25 million variable funding note facility and anticipates that the refinancing transaction will close during the fiscal fourth quarter of 2018.

The Company remains confident in its long-term guidance of low single digit domestic same store sales and 10%+ system-wide unit growth. Based on the Company’s year to date performance for the first 39 weeks of 2018 and the momentum in the business, we expect fiscal year 2018 results to exceed our long term targets. Additionally, for the fiscal year ending December 29, 2018, the Company is updating fully diluted Adjusted earnings per share to approximately $0.85, an increase from $0.80 previously. 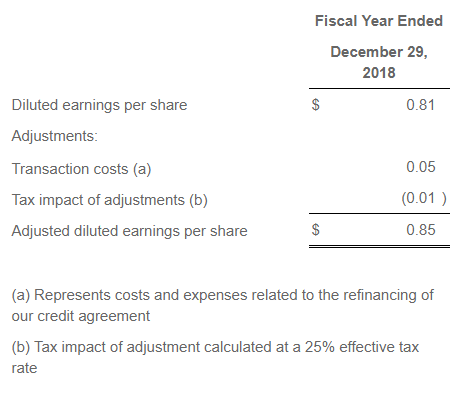 The following definitions apply to these terms as used in this release:

System-wide sales represents net sales for all of our company-owned and franchised restaurants, as reported by franchisees.

Adjusted EBITDA is defined as net income before interest expense, net, income tax expense, and depreciation and amortization (EBITDA) further adjusted for transaction costs, gains and losses on the disposal of assets, and stock-based compensation expense. We caution investors that amounts presented in accordance with our definitions of EBITDA and Adjusted EBITDA may not be comparable to similar measures disclosed by our competitors, because not all companies and analysts calculate EBITDA and Adjusted EBITDA in the same manner.

The conference call will also be webcast live and later archived on the investor relations section of Wingstop’s corporate website at ir.wingstop.com under the ‘News & Events’ section.

Wingstop Inc. (NASDAQ:WING) was founded in 1994 and is headquartered in Dallas, Texas. As of September 29, 2018, Wingstop operated and franchised more than 1,200 restaurants across the United States and nine other countries around the world. The Wing Experts’ menu features classic and boneless wings with 11 bold, distinctive flavors including Original Hot, Cajun, Atomic, Mild, Spicy Korean Q, Lemon Pepper, Hawaiian, Garlic Parmesan, Hickory Smoked BBQ, Louisiana Rub, and Mango Habanero. Wingstop’s wings are always cooked to order, hand-sauced and tossed and served with our fresh-cut, seasoned fries and made-from-scratch Ranch and Bleu Cheese dips. The Company has grown its domestic same store sales for 14 consecutive years, has been ranked #3 on the “Top 100 Fastest Growing Restaurant Chains” by Nation’s Restaurant News (2016), was ranked #7 on the “Top 40 Fast Casual Chains” by Restaurant Business (2016), and was named “Best Franchise Deal in North America” by QSR magazine (2014). For more information visit www.wingstop.com or www.wingstopfranchise.com. Follow us on facebook.com/Wingstop and Twitter @Wingstop.

To supplement our consolidated financial statements, which are prepared and presented in accordance with GAAP, we use non-GAAP financial measures including those indicated above. By providing non-GAAP financial measures, together with a reconciliation to the most comparable GAAP measure, we believe we are enhancing investors’ understanding of our business and our results of operations, as well as assisting investors in evaluating how well we are executing our strategic initiatives. These measures are not intended to be considered in isolation or as substitutes for, or superior to, financial measures prepared and presented in accordance with GAAP. The non-GAAP measures used in this press release may be different from the measures used by other companies. A reconciliation of each measure to the most directly comparable GAAP measure is available in this news release. In addition, the Current Report on Form 8-K furnished to the SEC concurrent with the issuance of this press release includes a more detailed description of each of these non-GAAP financial measures, together with a discussion of the usefulness and purpose of such measures.

Certain statements contained in this news release, as well as other information provided from time to time by Wingstop Inc. or its employees, may contain forward-looking statements that involve risks and uncertainties that could cause actual results to differ materially from those in the forward-looking statements. You can identify forward-looking statements by the fact that they do not relate strictly to historical or current facts. These statements may include words such as “guidance,” “anticipate,” “estimate,” “expect,” “forecast,” “outlook,” “target,” “project,” “plan,” “intend,” “believe,” “confident,” “may,” “should,” “can have,” “will,” “likely,” “future” and other words and terms of similar meaning in connection with any discussion of the timing or nature of future operating or financial performance or other events. Examples of forward-looking statements in this news release include our fiscal year 2018 outlook for new restaurant openings, domestic same store sales growth, SG&A expenses, net income, EBITDA, adjusted EBITDA, adjusted net income, adjusted earnings per diluted share and our diluted share count, as well as our anticipated potential domestic restaurant expansion opportunity, positioning to make progress towards domestic restaurant potential, progress toward our goal of becoming a top 10 global restaurant brand, and the timing of the completion of our planned refinancing transaction.

Any such forward-looking statements are not guarantees of performance or results and involve risks, uncertainties (some of which are beyond the Company’s control), and assumptions. Although we believe any forward-looking statements are based on reasonable assumptions, you should be aware that many factors could affect our actual financial results and cause them to differ materially from those anticipated in any forward-looking statements. Please refer to the risk factors discussed in our Form 10-K for the year ended December 30, 2017, which can be found at the SEC’s website www.sec.gov. The discussion of these risks is specifically incorporated by reference into this news release. 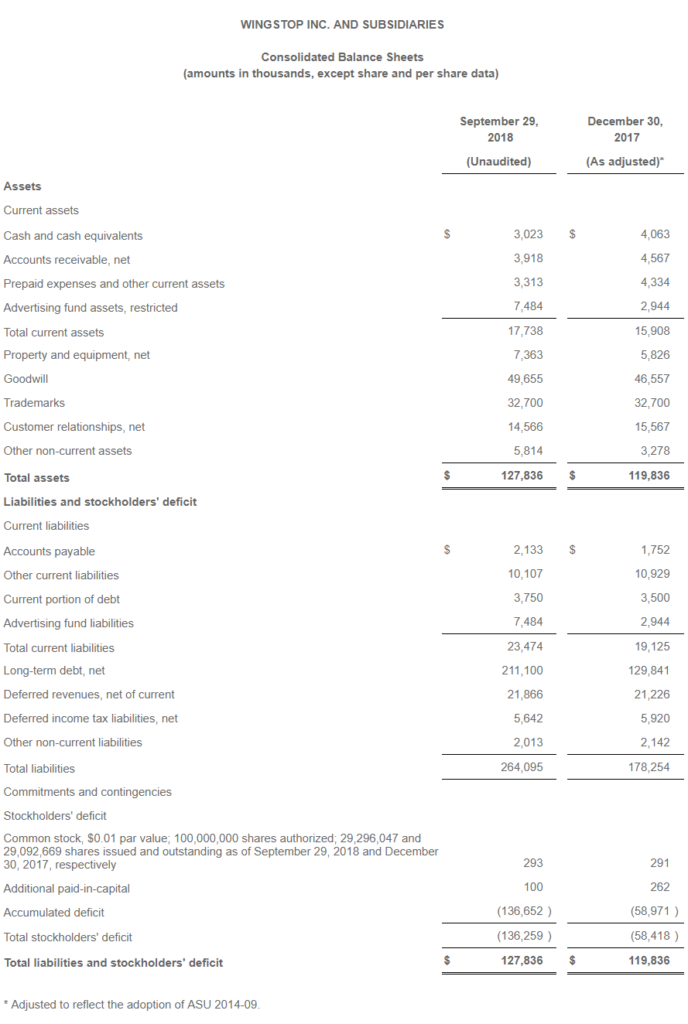 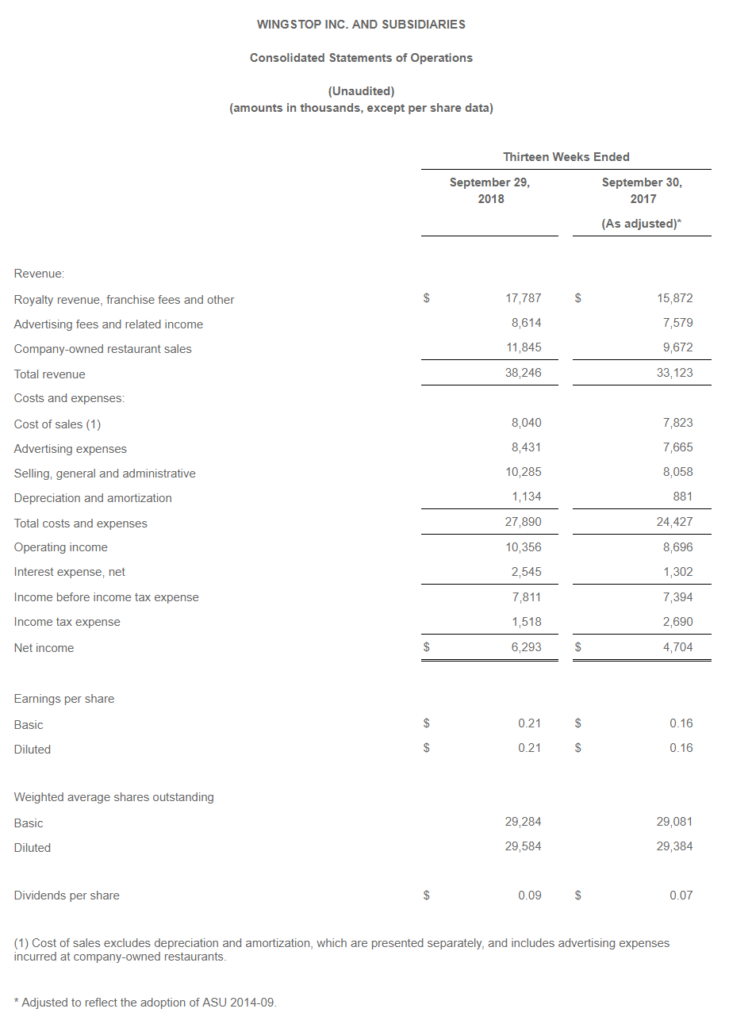 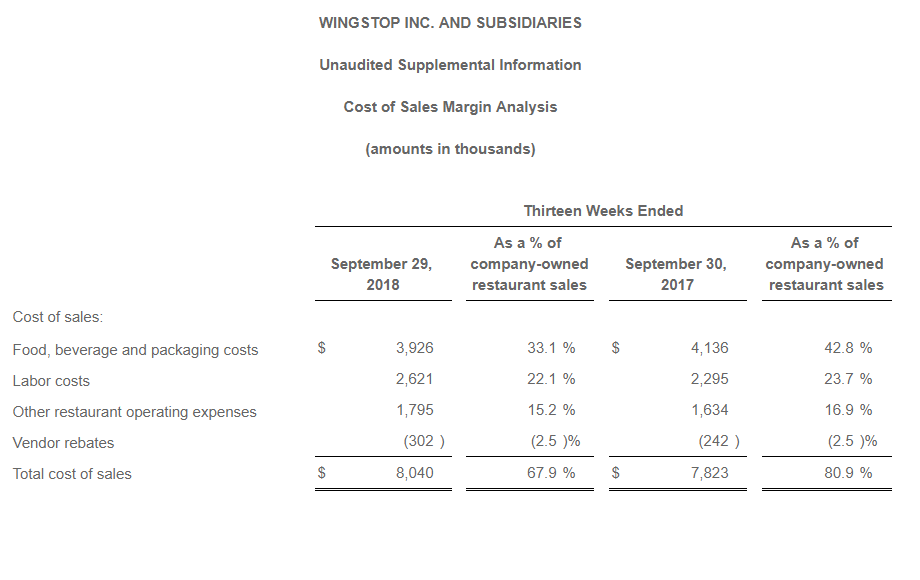 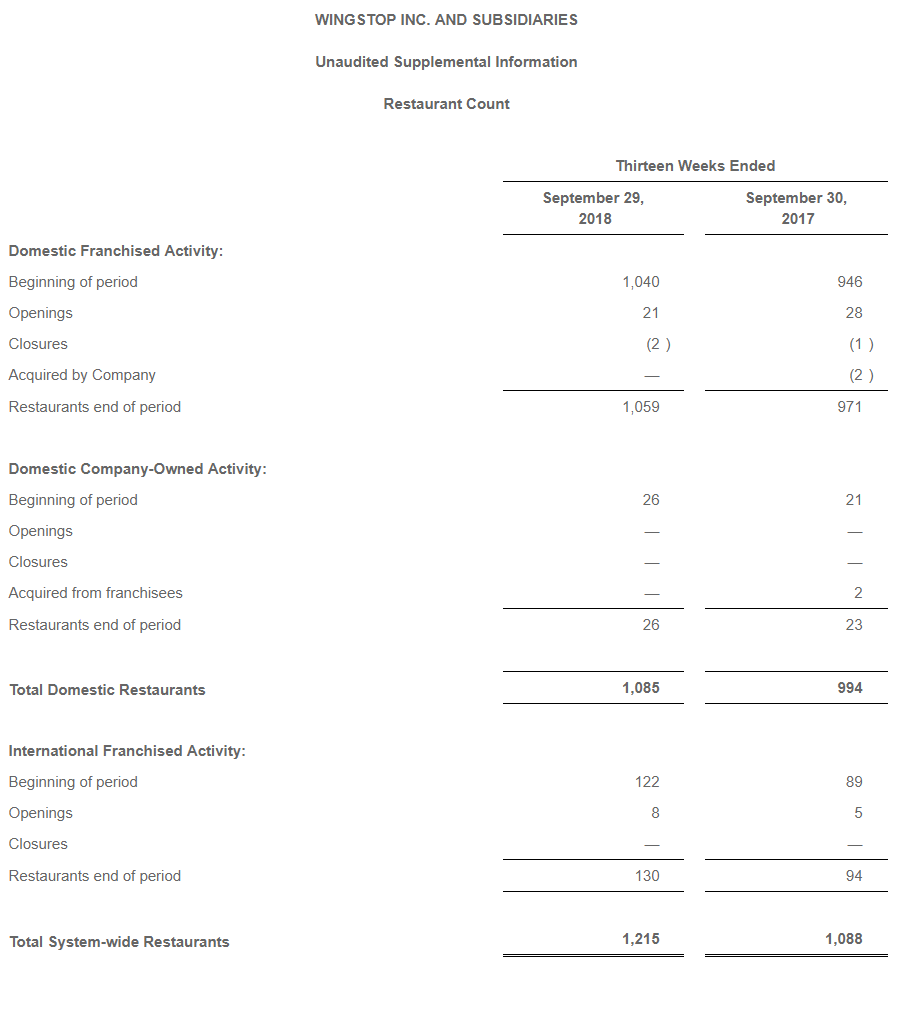 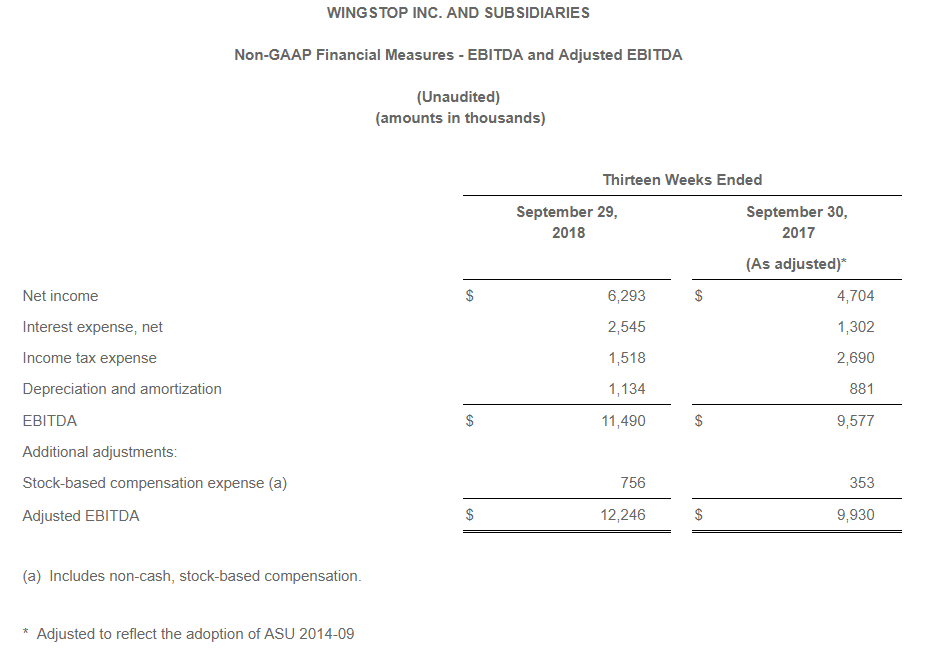