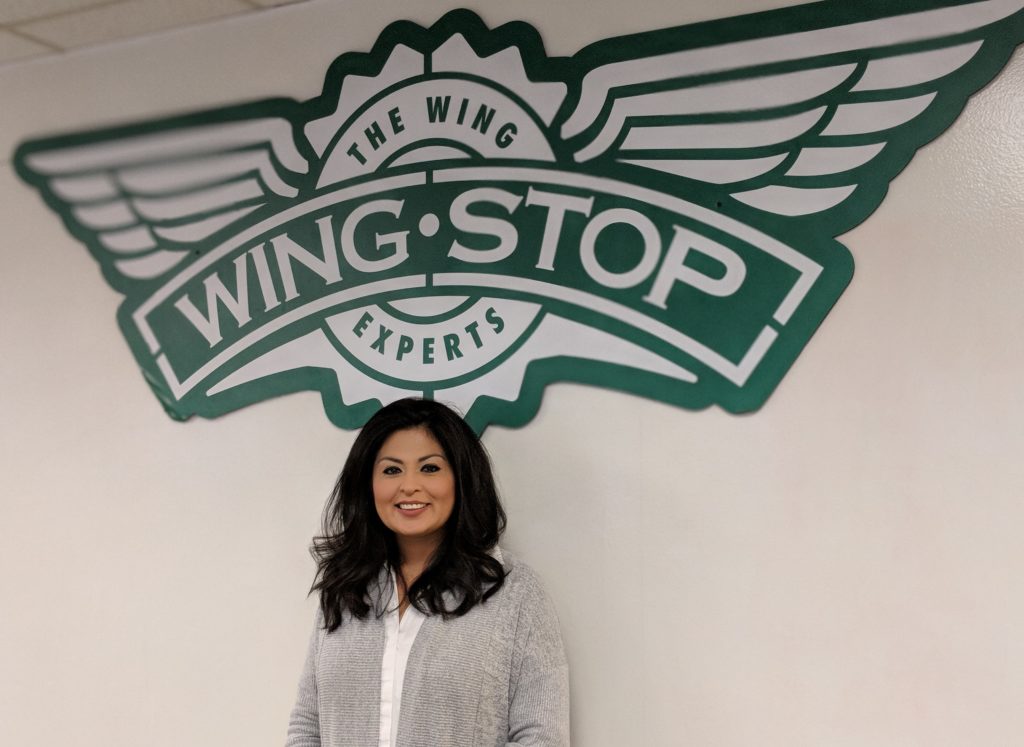 Noralba (Nora) de la Rosa was shocked when she learned she was the latest “Golden Goose” of Wingstop. An honor recognizing only the most outstanding, the company recently named her Restaurant Support Center (RSC) Team Member of the Year. As senior director of field marketing, her role most often sees her off-site and in the field. She manages the U.S. field marketing team, which is responsible for the development and implementation of local marketing strategies and initiatives for Wingstop brand partners.

“Once you realize what you’re capable of, the fear goes away.” – Nora de la Rose, Senior Director of U.S. Field Marketing

Her array of accomplishments demonstrate her success with Wingstop; but, how did she do it? Her tenacity and drive play a large part, inspired by her experiences as a young migrant worker. As she progresses through her career, the lessons she learned inspired her to pursue what she’s passionate about.

Her family having emigrated from Mexico, Nora was born in Idaho, her family working as field hands farming onions and sugar beets. She often worked long hours in the sun and dirt, and at times felt helpless. Though she values the importance of physical labor in the U.S., Nora believes the hardship she endured shaped who she is today. Those experiences taught her about her true capabilities; and because of them she knew what adversity looked like, and that gave her the drive to succeed. Not afraid to fail, Nora operated through life with steadfast determination. “Once you realize what you’re capable of, the fear goes away,” she said.

When asked about the milestones in her career, Nora pointed out that she sees them more as metrics. She approached her goals strategically, specific objectives in mind. Early on, she understood that to succeed, she must be ready to recalibrate. Determined to forge her own path, Nora entered the reporting field, attracted to its fast pace and fluctuating environment.

Nora soon learned, however, that reporting wasn’t for her. She recognized that she needed to close the door on her reporting career to be true to herself. As a professional communicator, it was only natural for her to transition her skillset to marketing. She accepted her first marketing role while pregnant with her daughter. Though it felt right at the time, it didn’t provide the work-life balance she needed. Although Nora was eager to start her new career, she learned the importance of identifying her long-term and short-term goals.

Later in her marketing career, Nora did what many find risky in the corporate world – she took a five-year break to care for her daughter. When she was ready to re-enter the workforce, she faced a clear stumbling block.

“Wingstop didn’t care about the gap. They believed in my capabilities and asked about my experience.” – Nora de la Rose, Senior Director of U.S. Field Marketing

“It’s often difficult for people, women especially, to justify that time off and restart their career,” Nora said. “Wingstop didn’t care about the gap. They believed in my capabilities and asked about my experience.”

Wingstop offered her a role for her to continue her career and an environment where she could grow. She started as field marketing manager for the Northeast region, operating from her home office in New York City.

Nora admitted it was a challenge to re-enter the workforce. Wingstop was known as a leader in the digital world, and she had missed many of the recent advances. Because of that, not only did she have to retrain herself, but she had to adopt new tactics. In the increasing digital and social landscape of marketing, she had to catch up; and she accomplished this by relying on her existing skillset.

Her willingness to grow that skillset proved her worth to her team. In fewer than two years, Nora was promoted to regional marketing director. She didn’t stop there. In October 2018, her continued loyalty was rewarded and she was promoted to senior director of U.S. field marketing.

Because she consistently exceeded expectations and went above and beyond, Nora’s success continued to roll in. At the 2018 Brand Partner Meeting, she accepted the RSC Team Member of the Year award. Shocked by it at first, she received the award graciously. “The award exemplifies that, from day one, WRI believed in my capabilities,” she said. “It’s a validation of the belief I in turn have in Wingstop.”

It is the “Golden Goose” award that Nora attributes as her greatest achievement at Wingstop. Communicator between brand partners and home office team members, Nora succeeded through her determination. Knowing what she was capable of, she rejected fear and stayed true to herself. She didn’t let herself fail and pushed herself to succeed despite challenges in her way.

Congratulations, Nora, for your accomplishments! We can’t wait to see how you continue impacting the brand in your trajectory with the company.

If you want to be part of a team that creates an environment where professional growth can flourish, look for positions on our careers page.