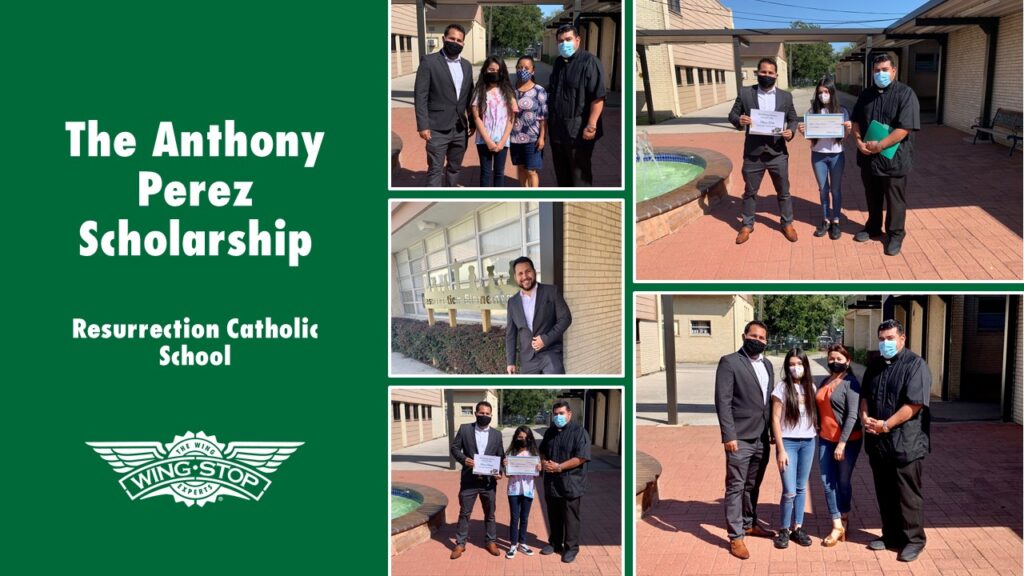 Anthony Perez, a new restaurant opening field marketing manager at Wingstop, went above and beyond this year for two students attending his elementary school alma mater, Resurrection Catholic School in Houston. Anthony said he had thought about creating a personal scholarship fund for years, even before joining Wingstop! When he sat down with his manager at Wingstop, she encouraged him to use this as a personal goal for himself.

“I wanted to do something to give back to the community I grew up in that helped shaped me and many others. The school has been around for 80 years! I wanted to help give similar opportunities to students that I had received when younger. The school I attended was very low income and highly minority. There are good students there, but I know that parents probably would struggle trying to afford tuition since it’s a private catholic school in a low-income area.” – Anthony Perez

To create an opportunity not only to motivate students, but reward them as well, Anthony contacted the school principal. From there, they had many phone calls and meetings and ultimately established the Anthony Perez Scholarship, which Anthony funded personally, to help students with tuition.

After receiving countless essays from multiple students with inspiring stories, Anthony selected two girls whose essays spoke to him and touched his heart. Although the initial awards ceremony was postponed in April due to COVID-19, Anthony had a small gathering in early October with the recipients and their families where he awarded the students their $500 scholarship, and of course, some Wingstop gift cards!

“I’m very happy we established the scholarship for many reasons, but primarily for having a legacy at the school for future young minority generations. Sometimes, it might be difficult for students and families financially struggling, especially during the pandemic, so I wanted to have something in place to motivate the students to share their accomplishments, work on their education, and inspire all students there to continue telling their stories for years to come.” – Anthony Perez